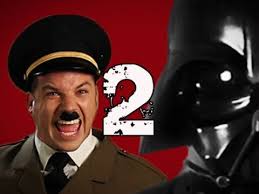 3 thoughts on “Epic Battles of Parenting: How YouTube is Corrupting Our Children (one rap at a time…)”