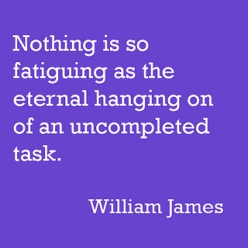 I’m sitting here writing because the mood has struck yet I’m painfully aware that I have a couple of deadlines to meet – namely long schools presentations that I must have nailed to near perfection for rehearsals next week. For the last few weeks, they’ve been on my radar, the paperwork imploring me to get to it and learn it. I’ve done all sorts of other preparation – highlighting, creating prompt cards, recording the presentations on my phone – but the main thrust of the task exists in staring at those cards and reciting them ad nauseam until the words flow effortlessly from my tongue.

But I keep procrastinating, finding other activities and jobs to do – whether folding laundry (which for a family of five is an almost never-ending task), planning future events, writing or lurking on Twitter. Incoming phone calls have been allowed to linger for longer than usual and distractions from the children have been strangely welcomed – anything to avoid getting down to learning those texts.

You’d think I would have learnt by now that it’s good to complete tasks way before deadlines. I’ve experienced the dread of getting a 10,000 word final year dissertation complete (in German, even more terrifying) – and realising the foolishness of not pacing myself.  I’ve panicked after staying up to ungodly hours to get lesson plans done for an observation or inspection, all the while chiding myself for not getting them sorted at least a week before. I’ve cringed with embarrassment at the naff Valentines card I bought my husband one year, when we were living in New York City and I put off looking for one until late afternoon on the 13th. There are no major supermarkets stuffed full of Hallmark in central Manhattan; the shelves of all the bookstores and local shops were alarmingly bereft of suitable cards by 4.30pm. Why did I even leave it so late? (Admittedly there are a million and one distractions in NYC, and we hadn’t been there long so I was still finding my way around, searching for apartments and sorting out admin for the start of our expat life. Making a card was not an option, as we were staying in a hotel.)

Anyway, you get the idea. I’ve definitely been a pro at procrastinating. I started to change tack in the last few years when I realised how much stress could be avoided by getting things done way in advance of deadlines. Having children with unpredictable crises now and again (such as throwing up all night) taught me that I cannot rely on living my life last minute. I think much of this has to do with how one was brought up – and, yes, my parents were equally haphazard with timing, often rushing everywhere and leaving things ‘til the last minute.

Procrastination causes unnecessary stress. Which in turn makes you grumpy to those around who have to endure your panicked tirades about what you desperately must get done before it’s too late. It also turns every event – even joyful ones such as a family get-together – into far from joyful occasions. Instead of being free to enjoy such a date, you’re hurried and in a flap over all the things you need to organise because they’ve been put off until they absolutely had to be done. If you’re a procrastinator, you’re constantly running two steps behind, never really at ease with being in the moment. You can’t relax. And here’s the irony – all the time you spend putting things off, your thoughts are still constantly invaded by the task. You end up spending far more mind and soul energy on the task than you would have done if you just got to it earlier. I decided that the habit had to be broken.

How? Simply by being ruthless. Almost imagining that a deadline is in fact several days or weeks earlier and putting it at the top of a list of priorities, rather than letting it be pushed aside in favour of other events and distractions. For less major occasions and dates, this still involves making sure that everything is ready so that you can leave the house in good time. (I’m still learning this one. At the weekend, I felt quite smug about turning up on time at a restaurant to meet friends, only to soon discover that I was at the wrong restaurant! Thankfully, I was still within the time frame, as I had left in good time and could get to the correct one before they had seated). ‘Be prepared’ is a worthy motto, not just for Scouts, I’ve learned.

The result? Life is more peaceful, and you feel ready for the task at hand. Instead of constantly thinking: ‘I could have done that so much better if I’d just had a little more time’, you feel content that you have given something your best shot and secure in the knowledge that you are not letting others down. So to any other procrastinators out there, all I can say is – stop labelling yourself and decide to turn away from this frightful habit. And when procrastination tries to wrangle its way back into your daily pattern, use every ounce of strength to show it the door. The stress relief will be oh so worth it.

And with that thought, I’m off to learn those scripts…