On the anniversary of the London 7/7 bombings I’ve decided to post a poem which I wrote shortly after that fateful day, seven (eta: now 10) years ago. Thanks to Gillan Scott over at God and Politics UK who has also featured it on his (former) site. [Gillan can now be found over at archbishopcranmer.com] 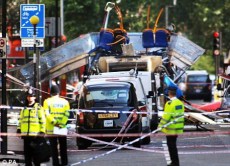 From elation to deflation
in less than twenty-four hours
From euphoria and applause
on the streets of London,
to sudden, forceful pause
across the transportation network.

Stillness in the city,
but for the sirens, the screams.
From gasps of delight
to gasps of horror,
From cheerful celebrations
to serene silence.

Lives cruelly snatched away.
Hearts leapt on Wednesday,
sank on Thursday –
Hope sapping from the heart of London
and the heart of man.
But our hope is in you, sovereign Lord

As the nations rage
our hearts remain steadfast in You.
Eight…